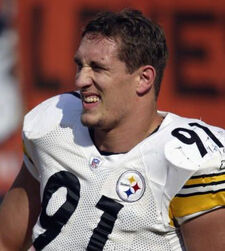 Aaron Douglas Smith is a professional American football player with the Pittsburgh Steelers in the National Football League. He plays left defensive end in a 3-4 defensive alignment.

Smith was drafted by the Pittsburgh Steelers in the 4th round, 109th pick overall, of the 1999 NFL draft. Smith played in every Steelers' game from 2000 though 2006. Smith has been considered an ideal defensive end in Pittsburgh's 3-4 defense. Smith won a Super Bowl ring with the Steelers in Super Bowl XL, during the 2005 season. He recorded four tackles throughout the game.

On February 27, 2007, the Steelers resigned Smith to a 5 year, US $25 million contract. Through the 2007 season, Smith ranks ninth all-time on the Steelers sacks list. After missing parts of three games with a knee injury early in the 2007 season, Smith missed the last four games with a biceps muscle torn against the New England Patriots in early December. Smith made a full recovery from the injury and has returned to his starting position in 2008.

Retrieved from "https://pittsburghsteelers.fandom.com/wiki/Aaron_Smith?oldid=3603"
Community content is available under CC-BY-SA unless otherwise noted.