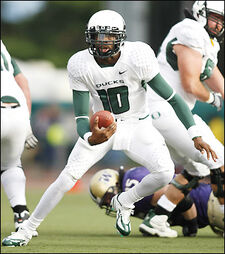 Dennis Lee Dixon, Jr. is an American football quarterback for the Pittsburgh Steelers of the National Football League. He was drafted by the Steelers in the fifth round of the 2008 NFL Draft. He played college football at Oregon.

Dixon was the starting quarterback for San Leandro High School's football team beginning his sophomore year. In his senior season of 2002, Dixon threw for 2,426 yards and 30 touchdowns, leading his team to a 12-1 season. Dixon completed his high school career with 5,951 yards and 79 touchdowns, guiding San Leandro to a 36-3 record, with his only losses coming in three straight California North Coast Section 4A championship game to perennial powerhouse De La Salle.

Dixon was a consensus 4-star recruit, and was ranked among the top passing and rushing quarterbacks in the nation. He eventually decided to attend the University of Oregon, stating that "I am going to Oregon with only one purpose, and that is to win a national championship.

Dixon was also a highly recruited baseball player, and was initially drafted by the Cincinnati Reds in the 20th round of the 2003 Major League Baseball Draft.

Retrieved from "https://pittsburghsteelers.fandom.com/wiki/Dennis_Dixon?oldid=3593"
Community content is available under CC-BY-SA unless otherwise noted.