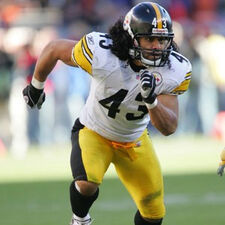 Troy Polamalu is the current strong safety for the Pittsburgh Steelers of the National Football League. He was drafted by the Steelers 16th overall in the 2003 NFL Draft. He played college football at the University of Southern California.

At Douglas High School in Winston, Oregon Polamalu was a three-sport athlete in baseball, basketball, and football. He played football for four years as a running back and defensive back. As a senior, he was an All-Far West selection in football, and an All-State center fielder in baseball; in basketball, he was a two-time all-league player.

In his career as a 3-year starter at the University of Southern California, Polamalu recorded 278 tackles (29 for losses), 6 interceptions (3 returned for TDs), 13 deflections, 2 fumble recoveries and 4 blocked punts. He was voted All-American first-team selection by The NFL Draft Report, Associated Press, Walter Camp, Football News, CBS Sportsline and ESPN, earning second-team honors from The Sporting News during his senior season. In 2001, he was named USC's MVP Award, led team with 118 tackles (79 solo), including 13 for losses (with a 2-yard sack) and six passes defended. He was also a roommate to current Cincinnati Bengals quarterback Carson Palmer and current Kansas City Cheifs quarterback Matt Cassel. He majored in general studies.

Polamalu was drafted 16th overall in the first round of the 2003 NFL Draft by the Pittsburgh Steelers. The Chargers, who had the 15th overall pick, had a major need at safety to replace Rodney Harrison but instead chose to go with quantity over quality forgoing the opportunity to select Polamalu by trading down and getting Sammy Davis and Terrence Kiel. The Steelers, ecstatic that Polamalu slid past the Chargers, quickly made a move to bring Polamalu to their team. The Steelers believed so much that Polamalu could have a positive impact on their defense that they traded up from the 27th spot to the 16th spot, originally held by the Chiefs. The Steelers traded away the 92nd and 200th overall pick for the rights to switch first round picks and select Troy Polamalu. Essentially, the trade was Polamalu for Larry Johnson, Julian Battle and Brooks Bollinger (the Bollinger pick was subsequently traded to the Jets in the same draft). He has the distinction of being the only safety ever drafted by the Steelers in the first round.

In the last game of his college career against Iowa in the Orange Bowl, Polamalu injured his hamstring in pre-game warm-ups and had very limited action in the game. Subsequently, the hamstring caused Polamalu to miss the Senior Bowl and 2003 NFL Combine as well. Polamalu was able to perform for scouts at his USC pro day.

He is easily recognized when playing for the Steelers due to the large mane of curly hair coming out of his helmet and down far beyond his shoulders. Polamalu's hair may well be the longest of any NFL player.

In the CBS Playoffs Pre-game Show, Polamalu said the last time he had gotten a haircut was at USC in the year 2000 when a coach told him he needed one. In Samoan culture, it is customary for men to wear their hair long. The hair was the center of talk around a tackle on October 15, 2006. After an interception where Polamalu looked poised for a touchdown return, Chiefs RB Larry Johnson pulled him down by his hair in order to tackle him and then pulled him up by it. Commentators correctly pointed out that pulling hair is legal and doesn't constitute unnecessary roughness; Johnson was, however, penalized for a late hit out of bounds for picking up Polamalu by pulling his hair.

Polamalu's blend of speed, anticipation, and instinct makes him a standout player who seems to be involved in almost every defensive play. The Steelers often use Polamalu in different packages. He may blitz the quarterback, come on a delayed blitz, or pretend to blitz and drop back into coverage, confusing the quarterback. Polamalu often adds to the quarterback's confusion by turning around and walking away from the line of scrimmage before the snap. In only his third season (2006), he tied the NFL record for most sacks, 3, in a single game by a safety. The 2007 Pro Bowl was his third consecutive Pro Bowl appearance; he started at safety for the AFC, playing next to the Baltimore Ravens starting free safety Ed Reed. The rivalry they share based on their teams' divisional rivalry was evident, as the two battled for possession of an overthrown halfback pass from former New York Giants running back Tiki Barber; Reed came down with the interception. He also made the AP NFL All-Pro Second Team in 2005, followed by being named to the First Team in 2006.

His first Super Bowl appearance was in Super Bowl XL in 2006, when the Pittsburgh Steelers gained the franchise's fifth Super Bowl (against a former USC teammate Lofa Tatupu) with a 21–10 win over the Seattle Seahawks.

On July 23, 2007, before training camp, the Steelers gave Polamalu the biggest contract in team history extending him through 2011. In an article on ESPN.com, Polamalu said, "I didn't want to be a player who is jumping from team to team. I've always felt comfortable here, I think this organization, this tradition they have here, is very legendary and I always wanted to be part of this." The four-year contract extension, worth just over $30 million with about $15 million in guarantees, made Polamalu one of the highest paid defensive backs in the league and the highest paid safety in the league (though this distinction was taken by Bob Sanders on December 28, 2007 when he signed a five-year, $37.5 million contract with $20 million in guarantees).

Polamalu was named a reserve to 2008 Pro Bowl despite having no interceptions and only playing in 11 games during the 2007 season. Polamalu's injury-plagued 2007 season led him to partake in a California rehab program. He suffered a hamstring injury late in his off-season workout, causing him to miss Pittsburgh's 2008 training camp. He returned to practicing with the team days after the camp's conclusion, however.

Polamalu was named to the 2009 Pro Bowl as the AFC's strong safety after being given a unanimous vote by five experts. He was joined by his Pittsburgh Steelers teammates James Harrison and James Farrior on the AFC Pro Bowl team. Polamalu's 4th quarter interception return for a touchdown in the 2009 AFC Championship game against the Baltimore Ravens helped the Steelers clinch a victory en route to another Super Bowl appearance. He didn´t make a great impact at the Super Bowl XLIII whith only 2 assisted tackles but he and his teammates beat the Arizona Cardinals 27-23 to become the first franchise to win six Super Bowl Championships.

He is of Samoan descent. Despite Polamalu's hard-hitting style on the gridiron, he is known off-the-field as a soft-spoken, Christian family man.

Polamalu is an Eastern Orthodox Christian, having converted through the influence of his wife Theodora. He makes the Sign of the Cross after every play (from right to left, in the Eastern Christian manner, as opposed to the more familiar left to right motion in the West). Among his spiritual activities is a pilgrimage to Greek Orthodox sites in Greece and Turkey, taken in 2007.. He seldom gives interviews, but when he does, he often speaks of the role his spirituality plays in his life. Polamalu has said that he tries to separate himself from his profession as much as possible, like not watching football games at home. He says a prayer after each play and also on the sidelines

Polamalu is known for his humble lifestyle. He is a family man. He rarely hangs out with teammates, instead preferring to spend time at home with his wife Theodora, the sister of former Rams tight end Alex Holmes, another former USC player, and best friend Tony Islas (Los Angeles).

Polamalu sat with Joe Hardy at the billionaire's 84th birthday party on January 6, 2007.

In January, 2007, he petitioned to change his legal name to his mother's maiden name (Polamalu), which he had been using for the last 15 years. His legal name had been Troy Aumua.

Polamalu's uncle is Kennedy Pola, the running backs coach for the Jacksonville Jaguars. Pola has been coaching for Jacksonville since the 2005 season, and his Jaguars have beaten Polamalu's Steelers in four of the five meetings since then. His uncle, Aoatoa Polamalu, played nose tackle at Penn State from 1984–1988. Polamalu is featured on the cover of the Scholastic children's book National Football League Megastars which profiles Polamalu and 14 other NFL stars.

Troy has appeared in several tv-commercials.

Retrieved from "https://pittsburghsteelers.fandom.com/wiki/Troy_Polamalu?oldid=3916"
Community content is available under CC-BY-SA unless otherwise noted.